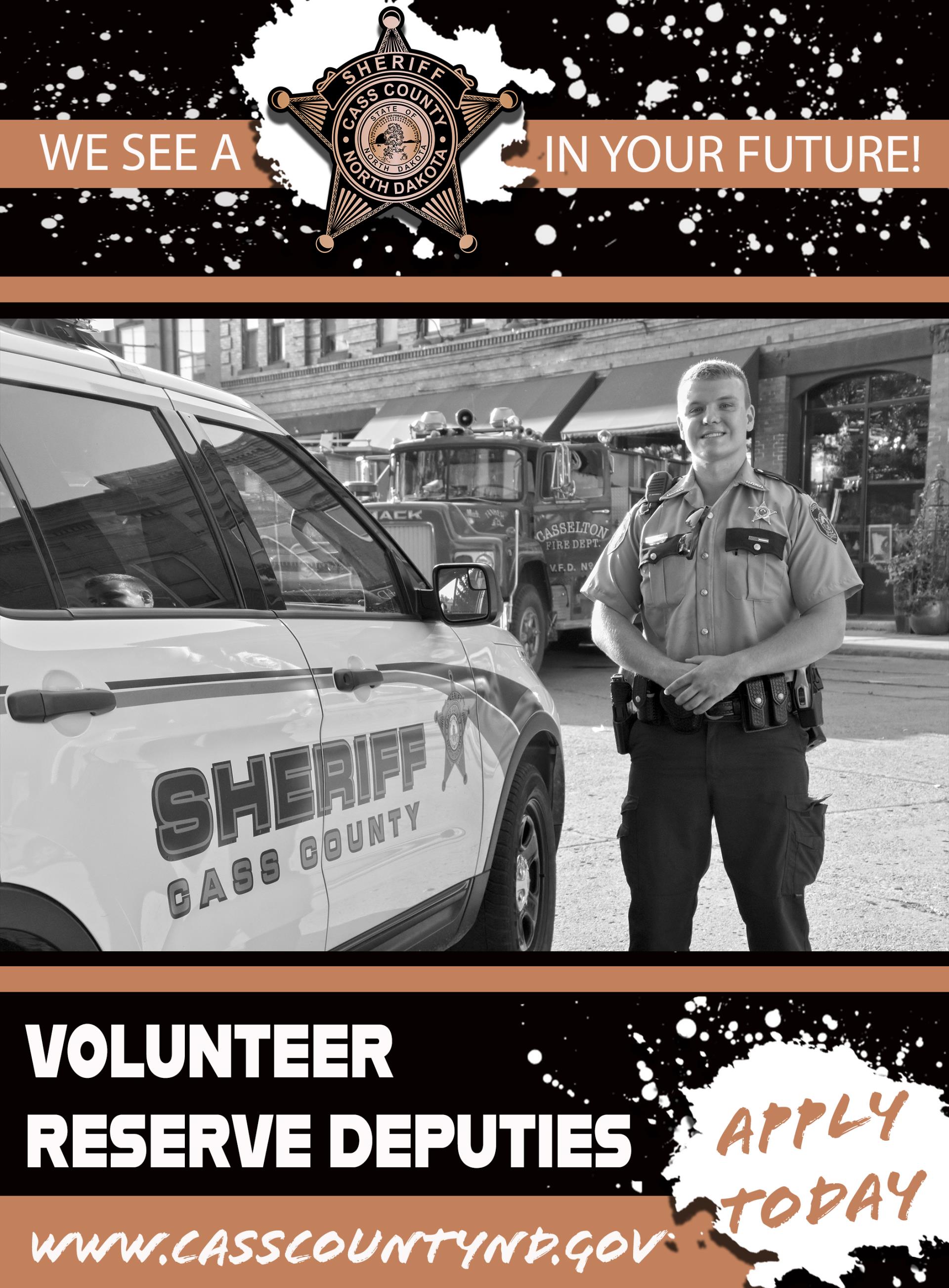 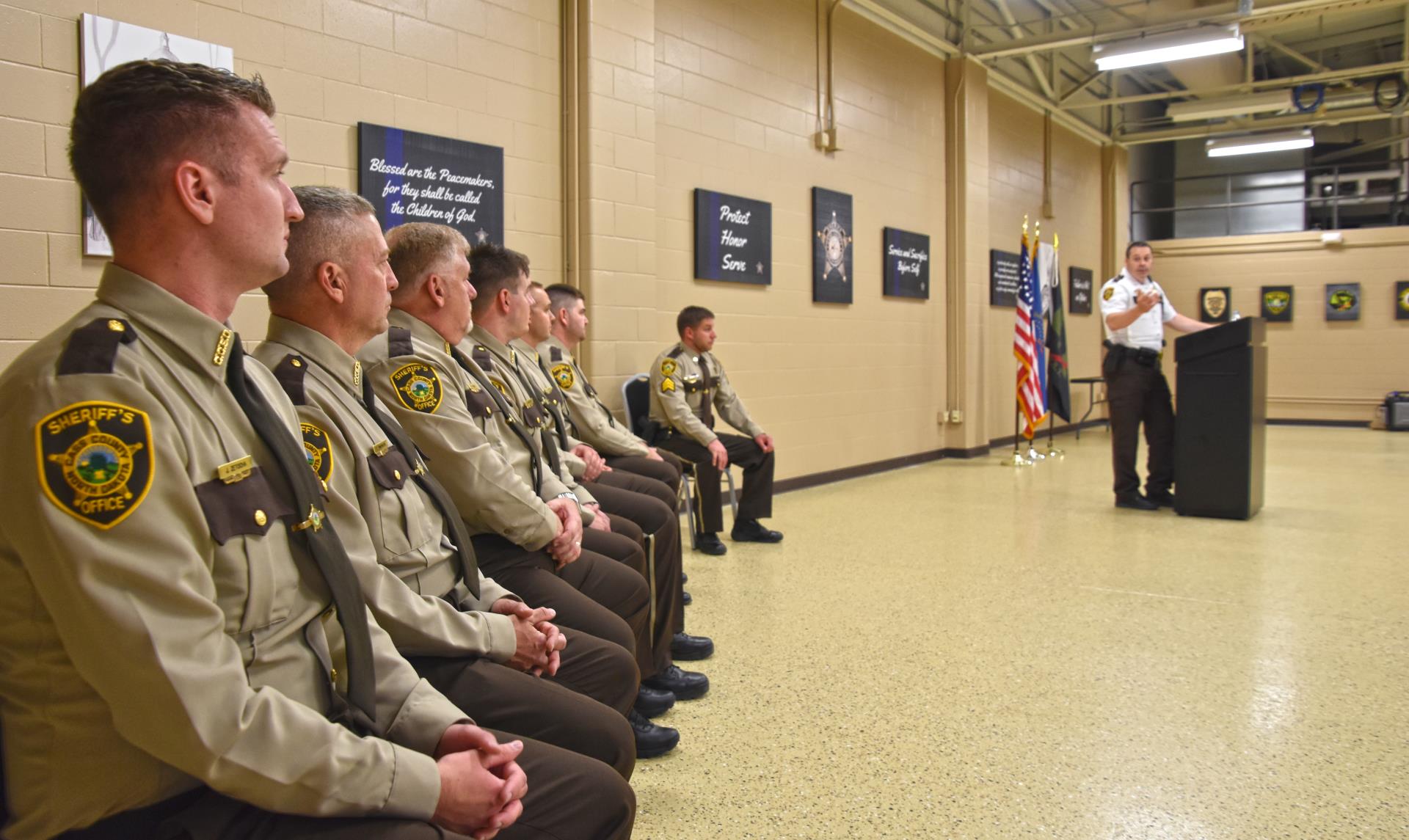 The Sheriff’s Reserve Unit (SRU) is composed of up to 25 SRU Deputies that are fully uniformed sworn deputies, under the authority of the Cass County Sheriff, with the main function of working special events to include the Red River Valley Fair, street dances, barn dances, traffic control, public appearances and other functions as assigned.

The SRU is completely a volunteer unit.  Under North Dakota law, SRU deputies are not eligible for monetary compensation for the volunteer hours they provide to the Cass County Sheriff’s Office.  Being an SRU deputy has a certain amount of prestige resulting from the strict requirements and the long and thorough training requirements.

Seasoned SRU deputies have the option to become Field Readiness Trained (FRT).  An SRU FRT deputy will have successfully completed a full Field Training program with  Field Training Officers (FTOs).  FTOs are specially trained to instruct and evaluate deputies and season SRU deputies as they learn how to patrol Cass County in a marked patrol vehicle.  We call Reserve Deputies who have this training SRU FRTs.  Currently, only 4 SRU FRTs exist in the Cass County Sheriff’s office.

In 2017 alone, SRU deputies volunteered over 5,500 hours between working events and the training requirements.  Of those approximately 5,500 hours,  SRU FRTs spent over 1,500 hours patrolling Cass County in marked patrol cars.

All SRU deputies are authorized to enforce North Dakota Century Code and make arrests.  SRU FRTs are also authorized, because of their specialized training, to conduct traffic stops and issue traffic warnings and citations. 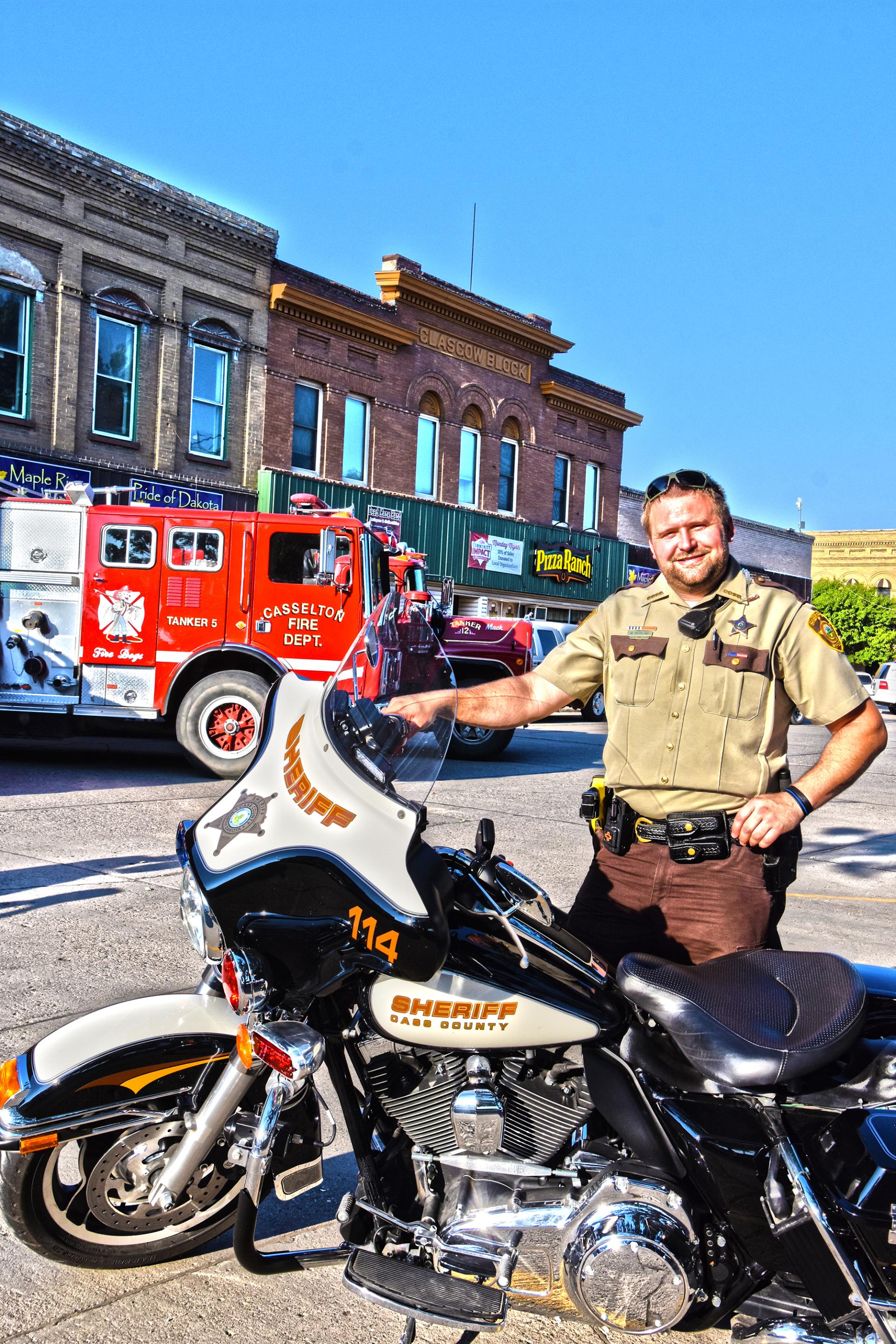 First-year recruits will be expected to go through approximately 90 hours of training in their first year.  During this time, the candidate is not a sworn deputy until after the successful completion of the training program that lasts from December and goes until graduation in June. The training is usually on Tuesdays from 6:00 PM and goes no later than 10:00 PM.  If a class gets postponed, it usually will be made up on a Thursday.  There are some training that can be missed, but most of the training is considered a requirement to complete the program. At the graduation ceremony, the Sheriff will swear in the candidates as Cass County Deputies.

There are different classes held for second year SRU deputies, third-year deputies, and also FRT SRU deputies.  Some classes are held for all different groups of SRU deputies because they are re-certification classes that need to be refreshed either yearly or every other year.

If an SRU deputy misses certain required classes and is not able to go to a makeup class, it is probable, depending on the class, that they will be deactivated until such time that their training is back in compliance with the requirements.

Once an SRU Deputy makes it into the second year and all subsequent years, they are expected attend about 25-40 hours of training from December to June on Tuesday nights. 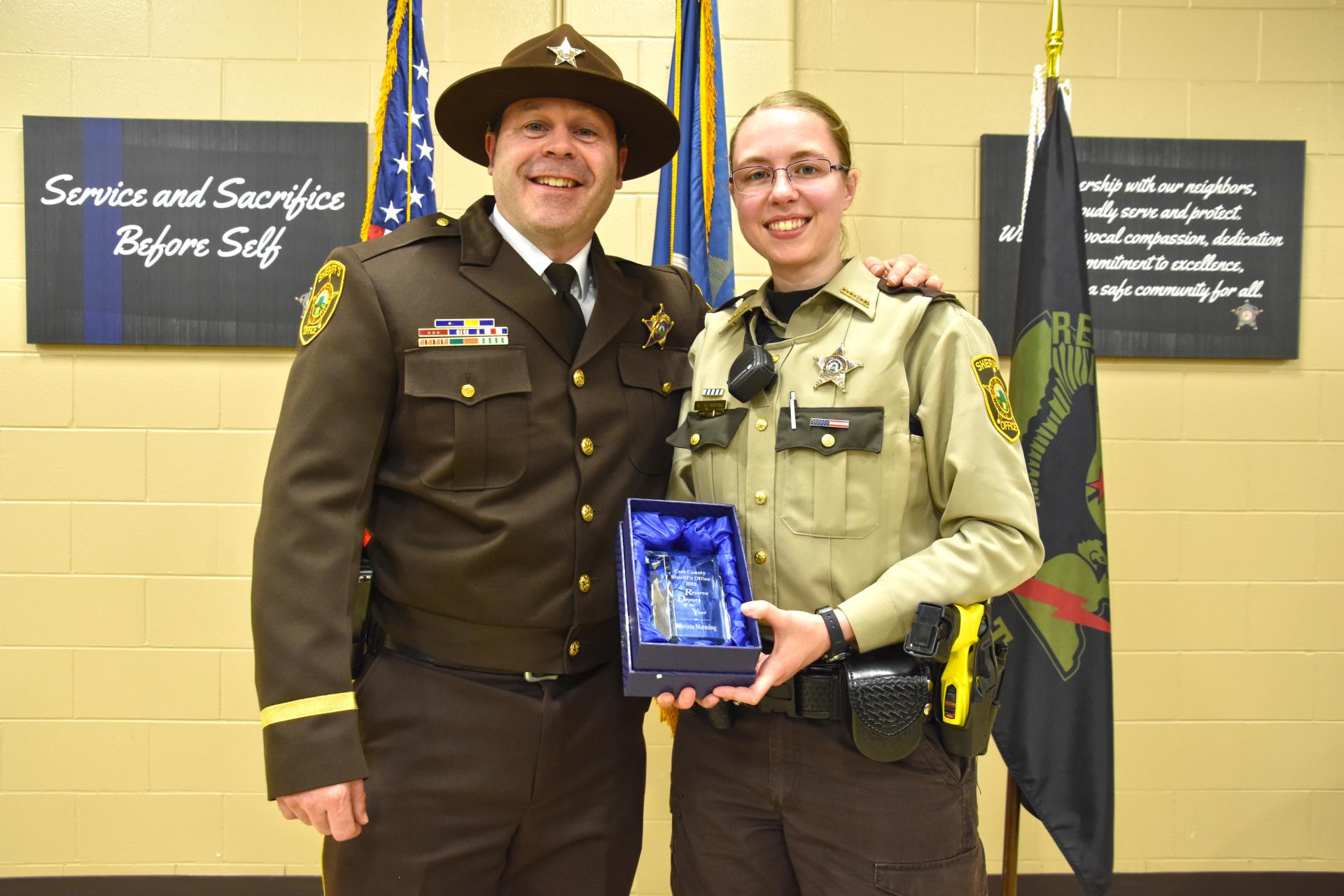 SRU Deputies are expected to work at least one event per month average over a year, as well as attend meetings which occur on Tuesday nights (sometimes Thursday nights) at least every other month.  Communication to deputies is usually through department email, phone, and meetings.  Lack of participation requirements may result in suspension or termination from the SRU program.

As with all Law Enforcement work, there will be reports and paperwork to complete if enforcement action is taken.  There is also the possibility of testifying in court.

New SRU Deputies are able to start work at special events, typically starting with the Red River Valley Fair (RRVF), immediately after they are sworn in by the Sheriff.  SRU Deputies will patrol the RRVF and make arrests if necessary.  There is an element of danger working as an SRU Deputy because when you are in uniform you are indistinguishable from a full time paid Cass County deputy.  The uniforms are exactly the same and nothing on the uniform says that you are a Reserve Deputy.  SRU Deputies are usually working alongside full-time paid Deputies so that there are mentors and supervision overlap.

SRU FRT deputies do not need direct supervision because of their level of experience and training.  Being an FRT is a very big responsibility.  Not all SRU members will become FRTs.  Becoming an FRT is an optional part of the SRU program and not everyone will make it through the training program due to the level of time, commitment, and strict standards to be able to obtain this status. 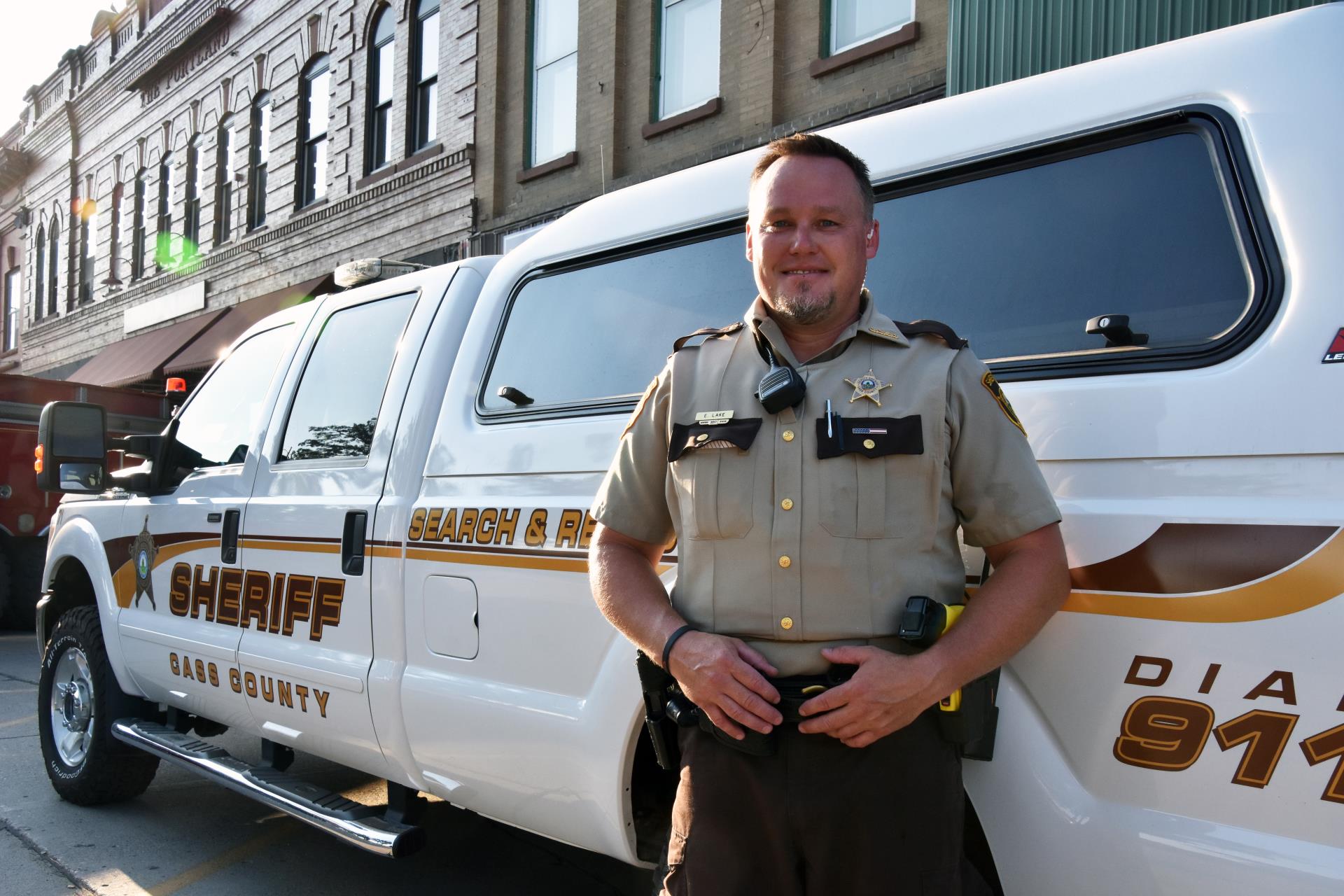 Many of our SRU Deputies have long-term ambitions to one day become a full-time Law Enforcement Officer, whether at the Cass County Sheriff’s Office or at another agency.  The SRU is a great start to a Law Enforcement career.  Being an SRU or former SRU is great on a resume.  Sometimes other agencies will call our agency to inquire about one of their candidate’s tenor and work performance with the SRU.

When there are openings in the Patrol Division for a full time paid Patrol Deputy with the Cass County Sheriff’s Office, FRT SRU Deputies are eligible to apply for those spots only IF they are licensed or they are an eligible to be licensed law enforcement officer in the state of North Dakota.

The Cass County Sheriff’s Office will not send deputies to the academy to become licensed at their expense due to budget constraints.  This is something that the FRT SRU would have had to do on their own time and expense.

Approximately 40% of the full-time Patrol Deputies at the Cass County Sheriff’s Office started in the SRU first.  For the Cass County Sheriff’s Office, selecting an SRU FRT is great because we are able to see first-hand a potential candidate for patrol prove to us their abilities and also that they will be the right fit for a full-time patrol spot.  We believe this gives us a huge advantage of selecting the right people right from the start because we can see people in action for a number of years before actually hiring them full-time.

Because of the nature of work that an SRU Deputy will be performing, and the sensitivity of the information that they will have access to, the Cass County Sheriff’s Office has a very stringent background process.  We need to be sure that anyone who is selected to the SRU is a person of high moral integrity.  The public would also demand the same.  Below are the eligibility requirements for SRU.

If you are interested in becoming an SRU, please apply here to fill out a general application.  Be sure to specify in your application that the position is “Sheriff’s Reserve Deputy.” 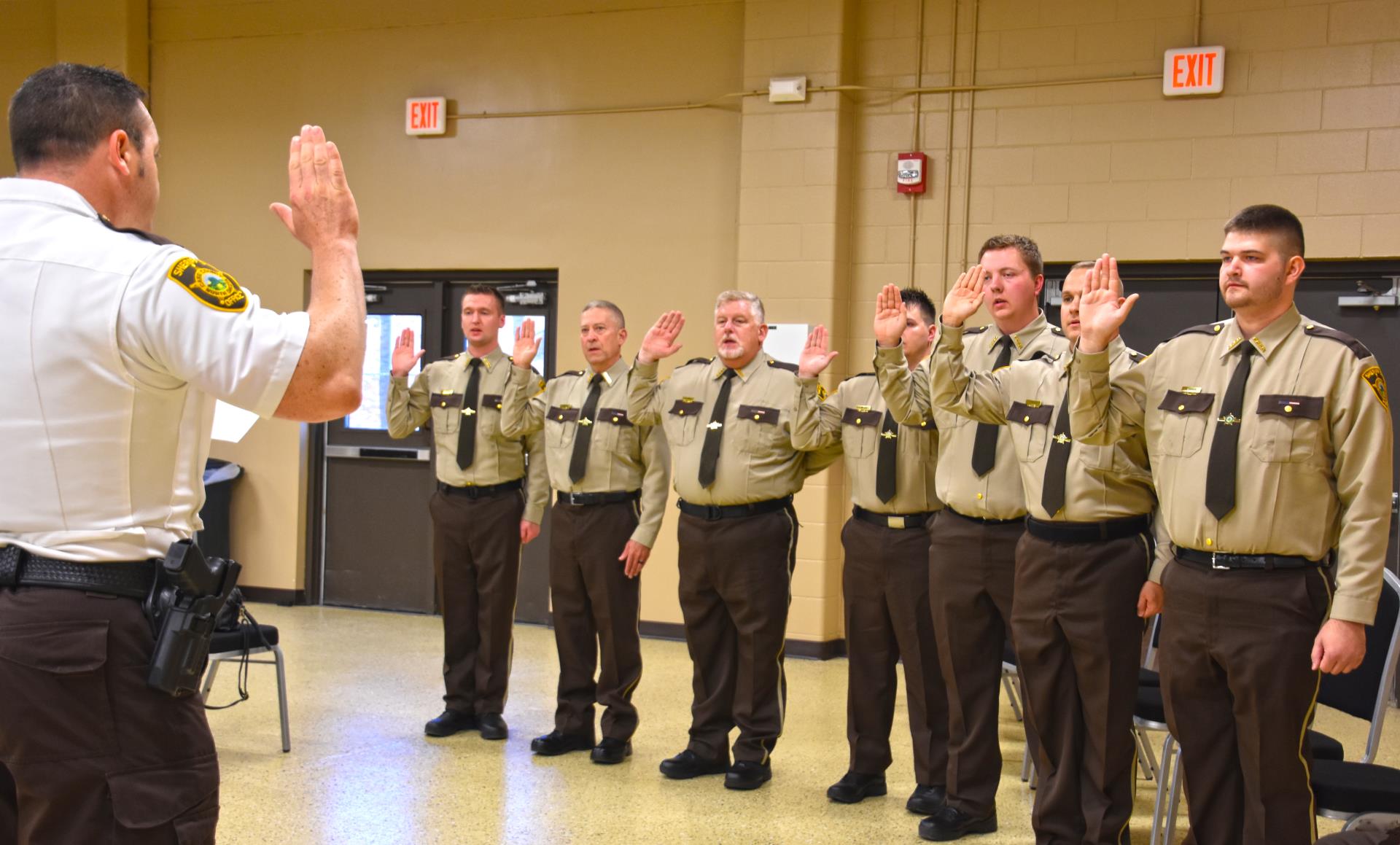